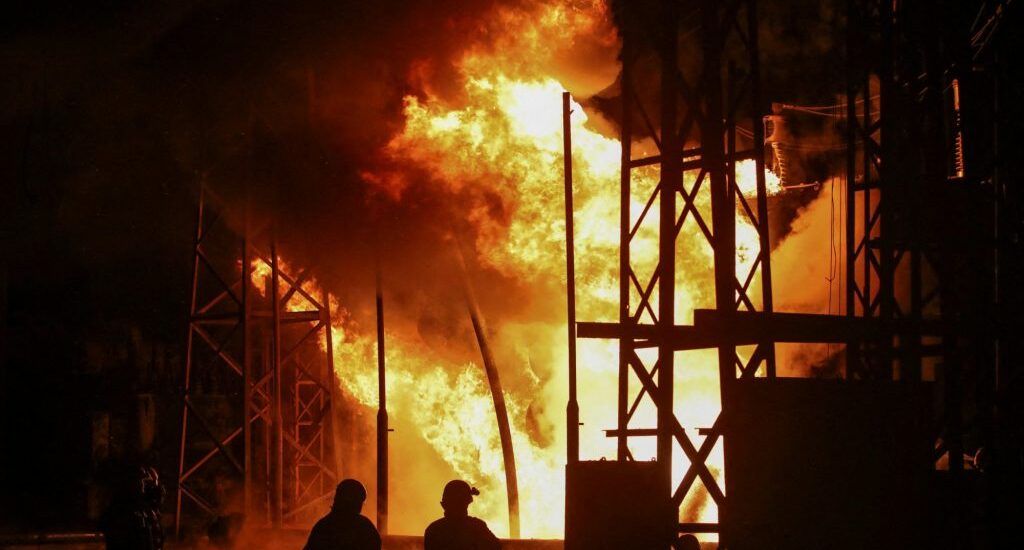 Russian President Vladimir Putin made global headlines on September 21 by threatening to use nuclear weapons if Ukrainians refuse to end their resistance to his invasion and continue to liberate Russian-occupied regions of their country. There has subsequently been much debate over whether Putin’s nuclear ultimatum is genuine or merely an attempt to intimidate the Western world into abandoning its support for Ukraine.

Many observers believe that a less publicized threat made one week earlier offers a clearer indication of Moscow’s likely next steps. Speaking on September 16 during a summit of the Shanghai Cooperation Organization in Uzbekistan, Putin noted a recent series of Russian attacks on Ukrainian civilian infrastructure and warned of more to come. “Just recently the Russian armed forces hit some sensitive targets. Let’s consider these to have been warning strikes. If the situation develops further in the current direction, our response will be more serious.”

The strikes Putin was referencing to included missile attacks on Ukrainian power stations in Kharkiv, Zmiiv, Pavlograd, and Kremenchug on September 11-12, which left parts of the Kharkiv, Poltava, Dnipropetrovsk, and Zaporizhia regions temporarily without water and electricity. Two days later on September 14, Russia struck a dam at the Karachuniv Reservoir close to Kryvyi Rih, causing fears over possible flooding and disruption to local water supplies.

Attacks on Ukrainian civilian infrastructure are not new and have been taking place regularly since the Russian invasion began on February 24. Nevertheless, the coordinated nature of the recent airstrikes indicates a change in tactics. This can also be seen on Russia’s Kremlin-controlled federal TV channels, which have recently began to actively promote the idea of destroying Ukraine’s civilian infrastructure.

Calls for a new campaign against civilian infrastructure targets across Ukraine have emerged following the Russian army’s humiliating retreat from Kharkiv Oblast in early September. The rapid pace of Ukraine’s advance and the comprehensive nature of Russia’s collapse sent shockwaves through Moscow. For the first time, many Russians began to understand that they may be witnessing the early stages of an historic defeat. This appears to have further radicalized opinion in the Kremlin, leading to open demands for war crimes targeting the Ukrainian civilian population.

Russia’s actions are in clear violation of the 1949 Geneva Conventions that established international legal standards for humanitarian treatment in war. However, with UN investigators already confirming that Russia has committed war crimes in Ukraine, an isolated and cornered Putin seems ready to entertain increasingly drastic measures in order to prevent his faltering invasion from unraveling further.

A Russian campaign against Ukrainian civilian infrastructure would have thousands of potential targets to choose from including everything from power stations and energy supply networks to water, internet, rail, and transport hubs. Any attacks that succeeded in disrupting the supply of food or medicines could have a devastating impact on whole regions, especially if timed to coincide with the coldest periods of the coming winter season.

The targeting of Ukraine’s civilian infrastructure poses obvious and significant challenges to the country’s population. While some elements of infrastructure are protected, many possible targets are highly vulnerable to attack. This could lead to significant loss of life and may also trigger a new wave of refugees as Ukrainians seek food and shelter in neighboring EU countries.

Ukraine’s energy infrastructure is thought to be particularly at risk from Russian attack. Russia is well aware of Ukraine’s excessive dependence on energy imports as well as the country’s issues with inefficient energy use. Attacks targeting energy supply could plunge entire cities into darkness and spark panic among the civilian population, with negative consequences for a whole series of different sectors.

With the winter heating season fast approaching, the Ukrainian authorities and the country’s international partners must waste no time as they prepare for Russian attacks on every element of the country’s civilian infrastructure. Likewise, ordinary Ukrainians should take measures in anticipation of possible coming disruption to basic services in the months ahead.

In military terms, this means enhancing and expanding Ukraine’s air defense capabilities. The best way to thwart Russian attacks is by preventing missiles from reaching their targets. Ukrainian leaders have been consistently requesting more air defense systems since before the Russian invasion began. Putin’s stated plans to target civilian infrastructure should now add a sense of urgency to these calls.

Cyber security must also be strengthened. Russia has previously demonstrated that it can disable vital infrastructure via cyber attacks. Such tactics are likely to be used in conjunction with airstrikes.

Ukraine must seek to increase energy efficiency and find alternative sources of energy supply in anticipation of possible disruption. Strategic reserves should be built up and preparations put in place to repair any damage. Encouragingly, drills are already taking place at key energy infrastructure objects.

Local authorities should consider establishing well-stocked community hubs offering warmth, electricity, and access to basic supplies such as food, water, and medicines in the event of massive infrastructure failure. Individual Ukrainians can take similar precautionary measures for their own households, and may also wish to stock up on specific items including torches, candles, canned food, and warm winter clothing.

Attempts to destroy Ukraine’s civilian infrastructure represent the latest escalation in Russia’s war against Ukraine. Moscow is now prepared to openly attack both military and non-military targets in order to achieve its goal of extinguishing Ukrainian statehood and erasing Ukrainian national identity. All the indications are that Ukraine will face an historically challenging winter of hardships as Russia seeks to break the country’s will to resist. It is vital that the necessary preparations are put in place without delay.

Victor Kevluk is an analyst at the Center for Defence Strategies in Kyiv.